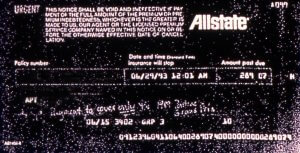 One of the predecessors to the modern photocopying machine was the photostat process, which utilized a camera to make a positive/negative facsimile image on sensitized paper.  This fairly expensive copy process had its advent circa 1900 by the Commercial Camera Company, later the photostat Corporation.  The word “photostat” was the trademark of the company and generically became the definition for the process itself.  Even today, true photocopies machines are still occasionally, and erroneously, referred to as photostats.

In 1993, the author was contacted by an Orlando attorney with a unique problem.  The attorney had a photostat of an insurance notice containing a short handwritten notation, the writer of which he wanted identified.  This photostat was, in a word, of terrible copy quality, typical of most photostats.  Sent along with the photostat was a copy of a personal check with a rather small quantity of known handwriting.  To add to the seemingly unsurmountable task, there were few letters in common to both the handwritten notation and the check standard.

The author advised the attorney that without the original insurance notification and additional handwriting standards, he was “not optimistic” that anything could be accomplished that would justify the expenditure.  The attorney, however, stated that an original of the notification did not exist, and insisted that anything that could be accomplished, no matter how limited, was worth the attempt.

The submitted insurance notice photostat was scanned and the area of questioned handwriting was cropped.  Then, just to make the handwriting a bit easier to view, the image was reversed so that what had been black was now white and vise versa.  Borrowing the thought process from a NASA algorithm for enhancing photographs, that of connecting points and letter portions that were highly likely to have been connected at one time, the “dots” were reconnected, using an early version of Photoshop.  In an effort to be conservative in this process, many pieces of letters were left unconnected, even though it probable that they had been connected.  Then, employing another photoshop algorithm, the background confusion was removed.  What then remained was a pretty much easily readable version of the questioned handwriting.

Now what remained was the actual handwriting comparison between the questioned handwriting and the check containing the standard handwriting.  This task accomplished, and court pending in this matter, a court chart was assembled.

The author opined that the questioned handwritten entry on the insurance notice was probably written by the individual that filled in the standard check.  The author then prepared himself for what he supposed would be a rigorous cross examination.  All for naught, the case never went to court.

Return to “Case Studies”
Back to the NDL Home Page