Now and Then (Hard)

Emil Griffin is the plaintiff in a lawsuit involving Shuttel & Shuttel Securities and one of their account representatives, Rubin Boxall.

Mr. Griffin has never bothered to keep close track of his investments, preferring instead to leave the details up to his broker. Recently the opportunity arose for him to become a principal in a new technology company. Needing funding, Mr. Griffin decided to cash in his previous investments with Shuttel & Shuttel.

After having his accountant review the investment account, he was told that his investments had not earned as much as they should have over the years. The per annum rate of return was some 1.5% less than the amount that Mr. Griffin told him that it was. Because his initial investment was quite sizeable, Mr. Griffin’s accountant states that with compounding, the difference could be as much as $350,000.

When Mr. Griffin inquired at Shuttel & Shuttel they produced the following letter, which is now at the very heart of the lawsuit: 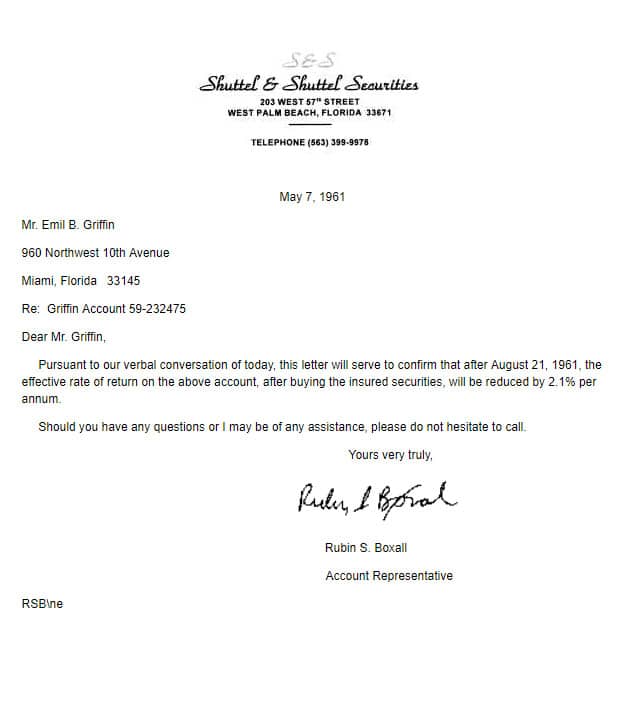 Emil states that he does remember a discussion with Mr. Boxall about a lower rate for switching to insured securities, but thought the reduction in return to be only .6% and not the 2.1% as in Mr. Boxall’s letter. Additionally, Mr. Griffin insists that the conversation, and letter that he remembers, happened about July, 1966, not in May of 1961. Unfortunately, Mr. Griffin cannot find his letter.

Emil’s attorney consulted with a Questioned Document Examiner as to the possibility of determining when Shuttel & Shuttel’s letter was written. Although the expert told Mr. Griffin’s attorney that dating the production of a document was a difficult undertaking at best, the attorney was adamant that he give it a try, and retained him.

Just one day after receiving a copy of the questioned Shuttel & Shuttel letter (the original seems to have disappeared), the expert called Mr. Griffin’s attorney and simply told him that the questioned letter was a fake.

How did he know?

Want a Hint?
Want another Hint?
Give Up?

Go Back to “Brain Teasers”
Go Back to the NDL Homepage