Indented writing, or second page writing, is the impression from the writing instrument captured on sheets of paper below the one that contains the original writing. This often manifests itself when pads of paper are used or in some record-keeping situations. Indented writing can be a source of identification in anonymous note cases and can be an invaluable investigation procedure when medical and other records are suspected of containing alterations. Often, a writing addition to a record or file can be revealed by an impression that has been transferred to the page below. Indented writing on subsequent pages may not be in agreement with what appears on the surface of the document. Writing found to be out of position, missing, or added after the fact can often be demonstrated by recovering and preserving indented writing from other pages.

We have all read mystery novels or been subjected to television and movie plots that have recovery of indented writing as part of a clue. The media method to “read” indented writing from suspect pages was to rub a soft lead pencil or carbon paper over the surface of the document. The indentations would be highlighted in relief. Although entertaining, the fact that this technique is one way to ruin or destroy what might be valuable evidence, should serve as a warning against amateur examinations.

Indented writing is normally recovered by one of two methods: either photographically using oblique (glancing) light or by use of an apparatus commonly referred to as ESDA, short for Electro-static Detection Apparatus. 1 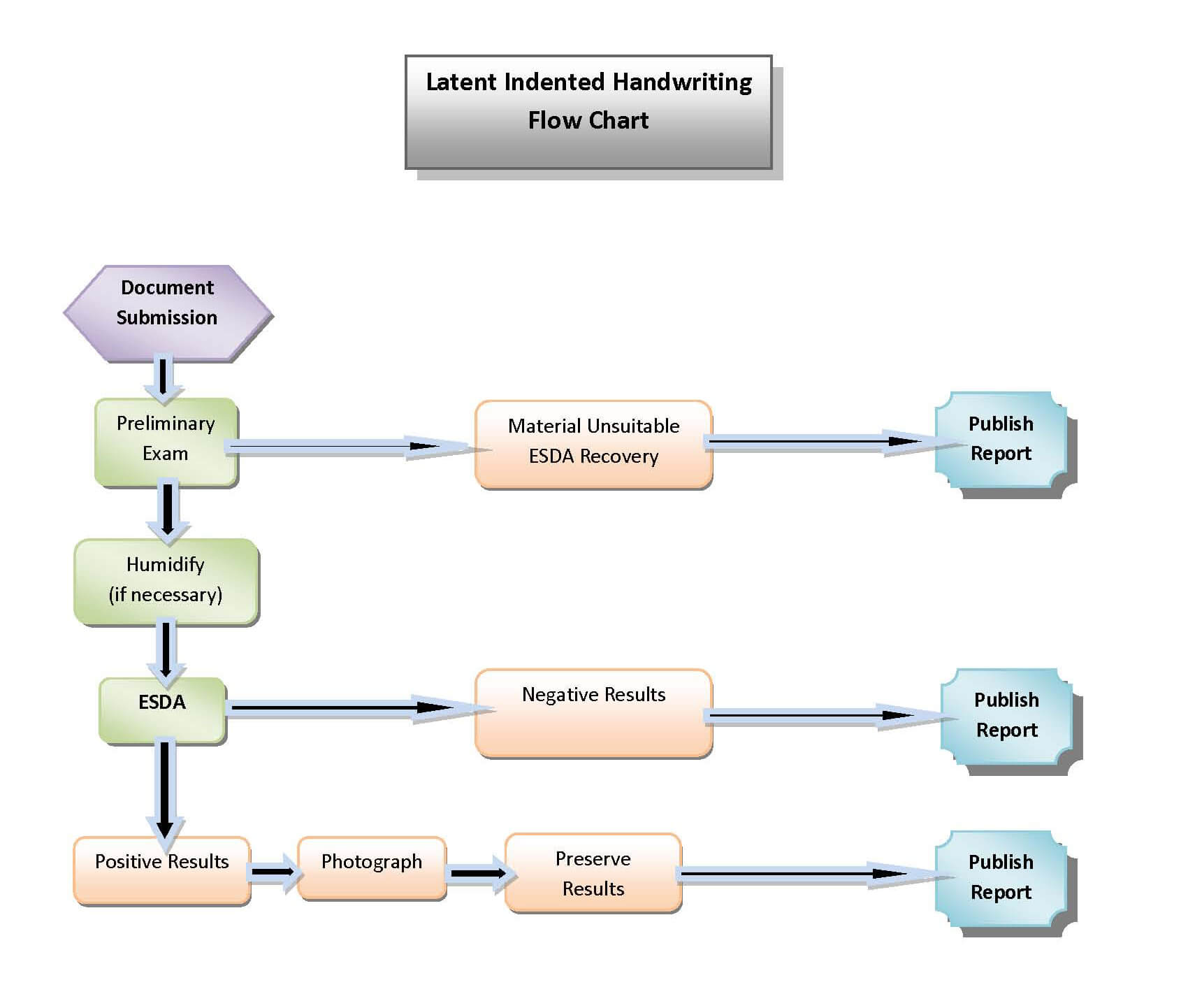 Until the advent of the ESDA, the Forensic Document Examiner applied oblique, or glancing light, to the furrows of indented writing. Photography was then employed to preserve the shadowed indentation. A combination of multiple exposures while moving the light source would fill in the available indentations with shadow and effectively reproduce the indented writing.

While oblique lighting/photography techniques are often quite acceptable, they lack the ability to recover non-visible microscopic indentations, typically those occurring three or four pages down. Using film, this technique had an inherently lengthy processing time. This process has been shortened dramatically by use of digital camera equipment.

The modern well-equipped forensic laboratory employs electrostatic detection to recover indented writing. The equipment is referred to as an ESDA, short for Electro-static Detection Apparatus. By employing the ESDA, indented writing may be recovered three, four, or even more pages below the original writing.

Usually a preliminary examination of the submitted document is first undertaken. This examination is intended to eliminate those documents or cases in which the material to be examined is unsuitable for the detection and recovery of indented writing by electrostatic detection. Documents which have been previously processed for latent fingerprints with ninhydrin or have been saturated with fluids normally fall into this classification. Thick cardboard mediums are usually incompatible with ESDA.

The document to be processed may need to be humidified slightly if it has been kept in, or had as its source, a dry environment. This will help the electro-static charge develop. An interior page from a pad of paper is an example of such an environment. In more humid climates exposure to normal room air would serve this same purpose. Most documents exposed to normal room conditions where the air is naturally humid do not need preconditioning. If necessary, the ESDA Humidifier may be employed.

The page suspected of bearing indentations is covered with a mylar material which is then pulled into firm contact with the paper by a vacuum drawn through a sintered (porous) bronze plate. This serves to “fasten” the document and mylar covering to the plate. The mylar covering prevents damage to the original document. The document and mylar are then subjected to a repeated high voltage static charge by waving an electrically charged “wand” over the document’s surface.

This results in a variably charged surface with the heavier static charge remaining within any impressions, even those that are microscopic in depth. Black toner (similar to that used in dry-process photocopy machines), is then cascaded over the mylar surface using microscopically-sized glass beads as a carrier, or by “misting” using a misting chamber placed over the questioned document. The toner is strongly attracted to static electricity and is retained on the mylar surface in accordance with the amount of residual static charge present at any given surface point. The areas of the document containing the higher static electric charge retain greater portions of the black toner resulting in a deposit of toner at the indentations in the paper.

While these developed indentations may be photographed, they are normally preserved by means of placing an adhesive backed clear plastic sheet over the mylar while it is still being held in place by the vacuum of the ESDA.

If the recovered indented writing is of a high enough quality, it may serve as a method to associate somebody to the questioned document using the handwriting in the indentations for comparison with known handwriting.

The examiner using electro-static detection equipment should exercise caution. Extreme voltages are part of the application and the quantities of ozone produced by the wand are far in excess of the safe exposure rates recommended by U.S. Government agencies and should be considered a health hazard. Operating the ESDA in a negative pressure environment such as a chemical hood is desirable.

The advantages of electrostatic detection are twofold. ESDA is non-destructive. The indentations are revealed on the protective mylar surface, and are fixed by applying pressure-sensitive adhesive plastic over the cellophane. Secondly, the original document remains unharmed throughout the process. ESDA is extremely sensitive and indentations which are not revealed by any other method may be readily observed and recovered.

1 The ESDA was developed and is distributed by Foster and Freeman, Limited – United Kingdom

Return to “Overviews”
Go Back to the NDL Homepage