Often an alteration or obliteration may be discovered and deciphered, or an ink differentiation determined by the document examiner.  The obvious and discernible evidence of a second writing instrument may well prove that an addition, after the fact, has taken place.  Occasionally, an examination of what appears to be a rather straightforward medical record reveals a trail of deception and attempts to mask evidence of wrong doing.1

In addition to a naked-eye or low magnification visual examination of the questioned material, an examination may also incorporate the use of selective color filters or color filter combinations (Dichroic Filters).  This could be the method of choice, for instance, in the examination of obscured, blood-stained documents.  Although at times this visual examination reveals evidence leading to a definitive opinion, usually a more thorough examination is necessary. Viewing by stereo-microscope may reveal subtle differences within the questioned material such as a slight change in shading or hue.  Secondary lines, indicative of alteration, when present, are usually discovered during this process.  More in-depth examinations of the questioned document using selective portions of the light spectrum can be accomplished by use of a process generically known as Video Spectral Comparison (VSC) or by chemical analysis of the ink by Thin-Layer Chromatography, (TLC). 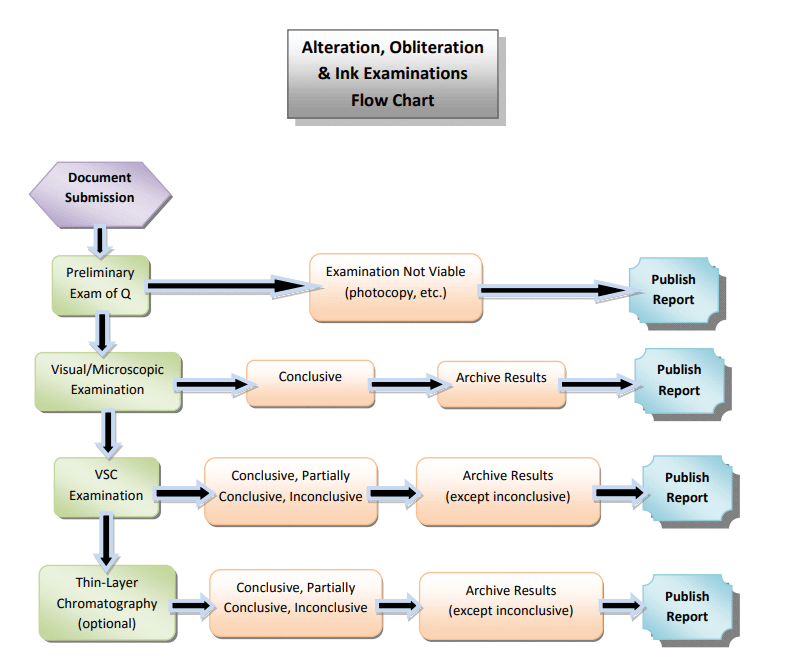 Infrared imaging equipment and infrared photography have opened up a new world for the questioned document examiner, although the concept is not new.  Every day we read about the deployment of a new “spy” satellite that employs infrared imaging.  “Snooper” scopes and infrared binoculars have been in use for decades.

How do these processes work?  The human eye perceives color as a reflection of a portion of the light spectrum.  When we observe somebody wearing a red shirt, the chemical composition of the dyes in the shirt material has absorbed the entire visible light spectrum with the exception of that portion that we have come to interpret as “red.”  However, just as we are aware that a dog is endowed with the ability to hear a much wider spectrum of frequencies than the human ear is capable of hearing, we should be aware that there is much more to the light spectrum than what we are capable of seeing with the unaided eye.  Every time we see a rainbow we observe a graphic display of the visual portion of the light spectrum.  The rainbow of colors that we observe, from red to blue, does not however, define the limits of the portion of the electromagnetic spectrum that has been defined as “color.”  There is an area on either side of that rainbow that we can not observe. These areas are Ultraviolet or “UV” and Infrared or “IR”.

Although we are not able to see in the infrared or ultraviolet regions of the light spectrum with the naked eye, we can use instrumentation to convert those wavelengths into visible images.   Different inks that appear similar to our unaided eyes may react quite differently when viewed under ultraviolet light or by use of infrared imaging techniques.

Using infrared, an ink can be observed to luminesce or glow, be transparent, or appear unchanged depending upon its chemical properties.  The infra-red examination may consist of using specialized light filters and films for photographic imaging or by use of  equipment specifically designed for infra-red imaging.   This process is referred to as Video-Spectral Comparison and the equipment is usually referred to as a Video Spectral Comparator, or VSC for short .2

Another highly selective process that may occasionally be employed is that of Thin-layer Chromatography, or “TLC.”   The TLC process is usually used in conjunction with ink comparisons rather than obliterations and, although by definition a destructive test, TLC is a most definitive process.3    When used in conjunction with the other methods as described above, TLC affords the examiner the most frequent opportunity to issue conclusive opinions concerning two or more inks on one document.

During TLC testing, small almost microscopic “punches” of ink are taken from the written line in question. The area of ink that is selected is from a portion of the line that is least likely to play a prominent part in any subsequent handwriting examination.  Places where the moving pen changed direction or where ink lines intersect are to be avoided.  “Punches” are usually made by using a blunted hypodermic needle, preferably one with a small diameter such as those used for insulin injections.   These work admirably and do little damage to the document.

These “punches” (some 4 or 5 or more) containing portions of the suspect ink are placed into a small test tube and the ink separated from the paper portion of the punch by the introduction of a solvent, usually pyridine.4  The resultant ink and solvent solution is spotted onto paper or glass plates specifically made for chromatography, and dried.

The chromatogram strip or glass plate is then placed into a beaker or similar glass container containing a small quantity of an alcohol-based solvent that covers the bottom to a depth of perhaps one-half inch, and covered.  The solvent will diffuse up the chromatographic medium, reach the ink spots, and continue its upward movement. Portions of the ink spot will separate into bands of color and migrate upward along with the solvent.  These bands, usually several in number, will each reach a stopping place on the strip.  A comparison of bands created by different suspect ink areas may at times allow for conclusive opinions that the inks are different.  However, it should be noted that even if the TLC bands created from different ink spottings appear in the same pattern, a conclusive opinion that both the questioned inks are from a common source (or writing instrument) is not possible. One must keep in mind that each ink manufacturer fills literally thousands of writing instruments, sometimes for different pen distributors, with ink of the same formulation. These formulations are changed infrequently over the years.  The best that may be opined is that the inks appear consistent in composition and could have come from a common source.  Although most TLC processes have the best results when traditional ball-point pen inks are involved, other solvents can be employed so that TLC may be used in conjunction with other inks such as those found in roller-ball or plastic-tip pens.

Yet another method for differentiating between different writing implements (usually limited to ball-point pens) is by microscopic observation of the striae, or lack thereof, left in the ink line by imperfections in the ball or ball housing of the writing pen.

Combinations of two or more of the above techniques may allow for extremely definitive opinions concerning alterations and obliterations, or ink and pen differentiation.

1  Lest the author be taken as an advocate, it is certainly accurate to state that the procedures outlined here may help determine that there was no alteration or addition to a record.  In fact, the majority of medical records which are examined during the course of a malpractice suit display no evidence of anything extraordinary – but you may not know that just from looking at them.

2  While there is some conjecture as to the origin of the VSC technology, the acknowledged standards of equipment are the various iterations of the VSC developed by Foster and Freeman of the United Kingdom.

3  The term “Destructive” while being technically correct may be a bit of an overstatement.  If the TLC test is performed with caution by an accomplished technician, the “destruction” may require almost microscopic observation to be seen.  That said, the author has seen a number of TLC “punch” results that were made by overzealous examiners, or those with lessor skills, that have seriously damaged the document.

4  TLC testing is considered a health hazard because of the chemicals employed; pyridine in particular.  It is therefore undertaken in a negative pressure area, such as a chemical hood using prescribed reagents and reagent concentrations.

Return to “Overviews”
Go Back to the NDL Homepage